Chiropractic is best explained through the three-part dynamic of science, art and philosophy, arguably unique to chiropractic among the healing arts.

The process of diagnosing which joints are misaligned and need to be adjusted back into their normal anatomic position is part of the science of chiropractic. This is usually determined by the way a joint is moving or not moving, the amount of swelling around a joint, the amount of sensitivity present in a joint, and objective indications of nerve pressure present in a specific place. The first three symptoms are fairly easy to detect. So is the fourth, though it is ironically the most contested and controversial aspect of chiropractic.

In addition to the tools to detect nerve pressure that chiropractors have developed over the last 100 years—many of which are so well researched and validated that they are used for testimony in court—there are the common orthopedic and neurological tests that are used by all physicians to identify nerve pressure.

While a compressed nerve is a relatively easy thing to locate, the proper treatment is rare. In reality, only chiropractors and osteopaths have any training in adjusting the spine, and modern osteopathic students are focused on medical interventions over adjusting. If you are symptomatic because a nerve is being pinched, does it make more sense to take a pill to mask your symptoms while the nerve is still being pinched and affecting every muscle, organ and cell the nerve supplies? Or does it make more sense to get an adjustment to get the pressure off the nerve, which will remove both the pain and the problem?

The art of chiropractic is the art of adjusting joints back to their proper position. While every joint in the body has nerves and blood vessels that travel through it, the joints of the spine are unique because this is where the spinal nerves exit the spinal column and branch off to feed every other part of the body. 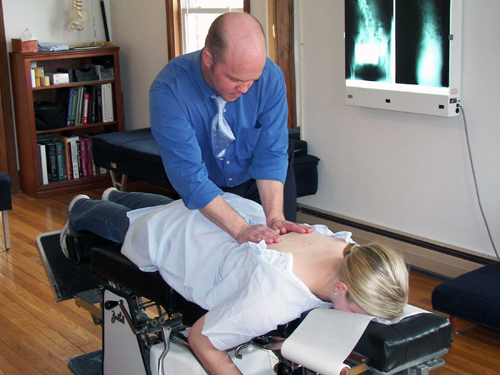 There are over 200 different named “techniques” for adjusting the spine, meaning the way a misalignment is diagnosed or how it is adjusted. Some techniques differ over philosophy, some over science, but most differ over the style of adjusting. Most people will find that chiropractic is like anything else: one technique may work especially well for them while another may not seem to work well at all. Be sure of one thing: if you are seeing Dr. Matthew or any other doctor of chiropractic and not experiencing results, you should doubt the chiropractor, not chiropractic.

It is worth noting that in many states, MDs are taking weekend seminars to learn to deliver adjustments, in no small part because they are seeing the respect that their patients have for chiropractic and the results that chiropractors are getting in both practice and research. In addition, massage therapists and physical therapists in many states are engaged in a legal struggle to have adjusting added to their scope of practice. As a patient, ask yourself—would you prefer to be adjusted by someone with six years’ training, or a weekend seminar?

The philosophy of chiropractic, upon which the art and science are based, is the philosophy that the body is a self-regulating, self-healing organism, and that your body knows how to care for itself better than any doctor ever could. This philosophy of “Innate Intelligence” has been mocked by many, though it is also fundamental in medicine. Medical doctors learn it as vix medicatrix naturae, and it means the same thing; “the healing power of nature,” that the body heals itself.

The obvious difference between chiropractic and medicine is that chiropractors attempt to address symptoms from outside the body by removing nerve interference that prevents the body from healing itself, whereas medicine tries to identify deficiencies and “inject” what is thought to be lacking. Chiropractic is far more natural and conservative than medicine. While there are certainly health conditions that slow the ability of the body to care for itself (like an organ deficiency such as insulin-dependent diabetes, or the inability to produce certain hormones after a hysterectomy) in most cases the body’s ability to heal itself is unrestricted. In fact, the introduction of drugs from outside is more often a cause of side effects, other symptoms and deficiencies leading to other problems and conditions, and causing the “need” for additional chemistry and drugs. All of us know someone who has gone through this process: it is always frustrating and often painful. The body is a miracle of homeostasis - a precise balancing of millions of metals, minerals, vitamins, electrolytes, proteins, carbohydrates, fats, neurotransmitters, complex biochemicals, immune system cells and toxins. The introduction of any drug from outside affects the body’s ability to balance, and the toxicity and foreign origin of pharmaceuticals is a serious challenge for our bodies to balance. In fact, the study of drugs has traditionally been called toxicology!

In chiropractic, we are interested in using the body’s innate ability to care for itself and to manage the internal environment. Granted, there are those doctors of chiropractic who believe that it is a miracle cure—that adjusting the neck can restore vision or allow the pancreas to make insulin again. While there are anecdotal cases of these sorts of “miracles”, the true miracle is what the human body is capable of when it can function properly. I would not want to be taken to a chiropractor if I were hit by a truck, but as soon as I was out of the ER, I would want my spine and nervous system assessed to make sure I could heal as quickly and effectively as possible. Proper function is the key to health, not lack of symptoms!

The Gonstead technique of adjusting the spine and extremities was originated by Clarence Gonstead in the middle of the twentieth century. Dr. Gonstead was a young man suffering from rheumatoid arthritis when he encountered his first chiropractor as a part of his search for relief after medicine proved useless to him. He was greatly helped and inspired by the results, and went to the Palmer School of Chiropractic on the G.I. Bill.

Dr. Gonstead fully dedicated himself to the science and art of correcting the subluxation, and in addition to his studies at Palmer, he gained rights to dissect many hundreds of cadavers in his dedication to understand anatomy and biomechanics as fully as possible. His practice grew quickly, and within a few years DCs in neighboring states noticed that some of their patients were disappearing—traveling long distances to see Dr. Gonstead. As time went on, Clarence’s reputation and practice grew such that he had to build an airplane landing strip and a hotel next to his eight thousand square foot clinic in order to house people coming from overseas and the west coast to get his help. Dr. Gonstead saw over a million patients in his lifetime and profoundly changed not just their lives, but the the chiropractic profession and anatomists’ understanding of the spine and biomechanics; Dr. Gonstead was responsible for Gray’s Anatomy reclassifying the sacroiliac joints as movable joints, among other contributions. 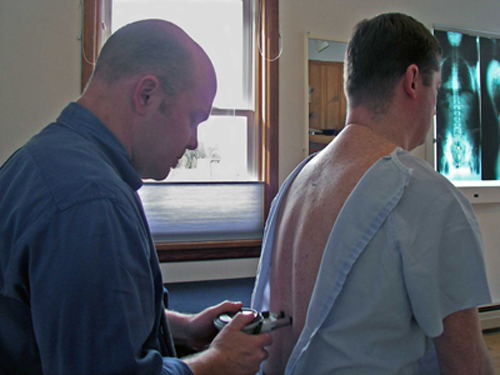 There are a few foci of Gonstead chiropractic that distinguish it from other applications of the adjustment. One is a focus on the balance of sympathetic versus parasympathetic nervous systems in pathology and visceral complaints. A second difference is the emphasis on patient management in the application of few adjustments: many chiropractors will mobilize the entire spine where a Gonstead practitioner will adjust as few segments as is possible, since specificity is a hallmark of both scientific methods and good clinical care.

A third difference is the focus on biomechanics; a Gonstead doctor is trying to adjust the vertebrae back into it’s correct position on the disk, versus adjusting the two facets at the back of the bone. What this means to you as a patient is that you will not have your neck rotated or your spine twisted during an adjustment. The single most common identifier of a Gonstead adjustment is the seated cervical (neck) adjustment. Most techniques address facet problems, while Gonstead practitioners look to biomechanics, which demonstrate the primacy of the disk in subluxation.

Dr. Matthew pursued the study of Gonstead chiropractic in school because in the first weeks of the curriculum it was clear that there were clinical and ethical protocols that made it a superior technique for adjusting the spine. He attended dozens of (expensive) seminars on Gonstead outside of and in addition to his campus education, and he practices this because he believes it to be the best thing for you—but if he ever finds something better he will learn that, too.

There is a fast-growing body of chiropractic research despite the fact that research is mostly funded by pharmaceutical and medical equipment companies that have an active interest in not seeing these studies done.

We have attempted to digest and present the research in a format we think will be most useful to you.

The first part of the research page presents a collection of some of the most compelling large-scale studies, most conducted by government agencies evaluating the safety, effectiveness and cost efficiency of chiropractic. This is followed by a transcription of the National Board of Chiropractic Examiners’ (NBCE) Practice Analysis of Chiropractic 2010, the second chapter of which is an in-depth review of major findings of research conducted over the last few years. The third section of the research page is a listing of links to studies online which is organized by health care topic.

Your Second Visit, the Report

Back and Pelvis Adjustments

About the Gonstead Technique

Get our free newsletter, Centred on Health